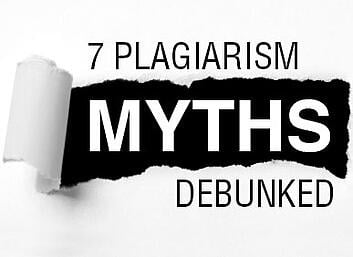 When it comes to plagiarism and other forms of misconduct in scholarly writing, research and publishing, there are many misconceptions and myths that, despite clear evidence to the contrary, are still widely accepted.

Unfortunately, these myths and misconceptions have had a serious impact on the quality of research and academic writing that’s published.

For one, it’s made it difficult to openly discuss some elements of plagiarism and misconduct in academic writing, often making it easier for misconduct to continue. For another, it’s created a sense of false confidence in the work that is submitted for publication, sometimes helping misdeeds to go undetected.

While these myths are not likely to go away anytime soon, it is only by addressing them directly that we can hope to weaken them and start the process of breaking them down.

In short, the longer these myths have wide acceptance, the longer many forms of misconduct will continue to be an anchor holding back the quality and progress of our research.

1. Plagiarism is Not a Rising Problem

There’s a misconception that plagiarism is not actually a rising problem and that it only appears worse because the technology used to detect plagiarism has increased dramatically in the last 20 years.

While it is true that the technology has improved and there are many cases in which modern tools have been used to detect plagiarism that happened decades earlier, it is far from the only factor in play.

For one, technology itself has proved to be a double-edged sword. Though it is easier to detect plagiarism, it’s also much easier to plagiarize. This includes easier access to material to pull from and simple ways to integrate plagiarized content.

In short, where 30 years ago a plagiarist had to research a topic by hand and retype the content, now plagiarism is a time-saving shortcut. That makes it more tempting than ever.

That temptation only grows when you factor in other elements, such as the increased pressure to publish among academics, which is often expressed by the saying “Publish or Perish”. This pressure is largely caused by the rising number of researchers competing for more limited resources.

Plagiarism is easier and more tempting than ever. As a result, plagiarism retractions are on the rise, even at publications that aren’t using advanced plagiarism-detection technology.

2. Plagiarism is Mostly a Problem Among Students and Not Professionals

While it’s tempting to associate plagiarism as being a mistake made by young and inexperienced academics still in school, the truth is that plagiarism is a problem at all levels of academia, including professional researchers.

Retraction Watch, a high-profile blog that tracks retractions in academic publications, has an entire section dedicated to retractions caused by plagiarism, all of which are from professionals and graduate-level researchers.

The problem of professional plagiarism became so bad that the Singapore Medical Journal and the Medical Journal of Malaysia, in 2008, published a joint statement warning researchers against submitting plagiarized works. In the statement, the two publications said that they have “recently encountered a number of submissions of plagiarized work to our respective journals.”

Unfortunately, students do not have sole ownership of the plagiarism problem, and it is an academic issue that is growing both in and out of the classroom.

3. The Plagiarism Issue is Blown Out of Proportion

Many believe that, while plagiarism is a problem, it’s one blown way out of proportion. According to those who believe this, the number of retractions doesn’t justify the intense focus and scrutiny the media and many academics have put on the issue.

However, the scrutiny is not without reason. A recent study revealed that retractions have grown 20 fold in the past 20 years, though the amount of work published has only doubled. This means, mathematically, a paper is about ten times more likely to be retracted today than it was in 1995.

The most common reason for those retractions is misconduct, including plagiarism.

Still, the number of retractions remains small compared to the total number of papers published. However, that number says nothing about the plagiarized papers that were caught before publication or, more worrisome, the ones that were found to be plagiarizing but are not retracted.

In short, plagiarism is a rapidly-growing problem for academic and scholarly publications, and one that is many times larger than the numbers seem to indicate.

While it is true that a lot of plagiarism and misconduct retractions take place at lesser-known journals, the truth is that there is often significant harm caused by misconduct in academic literature.

For example, in a recent post by Retraction Watch, it was shown that a series of retracted studies made a potentially dangerous drug treatment appear to be safe, possibly endangering patients’ lives. This analysis correlated with a 2011 study that found fabrications by Scott Reben, an anesthesiologist, may have resulted in some patients having their post-surgery pain undertreated.

With plagiarism, the dangers are less about patient safety and more about wasted resources. With limited funding, publication space and research space available, plagiarized proposals and studies cause unneeded duplication that wastes those resources and deny them to new, potentially beneficial research.

According to the Government Accountability Office (GAO), duplicative spending may cost the government as much as $200 billion annually, much of it through duplicative proposals and overlapping research.

5. Plagiarism is Primarily a Problem in Non-English Speaking Countries

While there is some truth that plagiarism is often a more frequent problem in non-English speaking countries, in particular for researchers trying to publish in English and are struggling with the language, language barriers are not the only factors that cause plagiarism.

Researchers who plagiarize do so for many reasons including the pressure to publish, lack of confidence in their writing, hubris and simple laziness. These factors are all, more or less, universal. As a result, plagiarism is very much a global problem with many of the best known and most prolific plagiarists being from the U.S., including the recent case of Gerry Lushington, who was censured for misconduct by the US Office of Research Integrity, which more commonly deals with fabrication issues.

In fact this issue isn’t limited to just academic writing, both Jonah Lehrer and Jayson Blair, the best-known plagiarists in journalism, were both from the U.S.

6. Almost All Plagiarists Get Caught

With all of the plagiarism detection technology, search engines and constant communication, it can seem like there is no way a plagiarist, especially a professional researcher, could get away with the misdeed in 2013.

However, nothing is farther from the truth.

First, there are limitations to the technology. Plagiarism dealing solely with ideas and data, for example, can’t be detected currently.

However, the biggest blind spot in the technology is that it still requires humans to both use the tools available and draw the correct conclusions. Sadly, though the tools can greatly reduce the amount of plagiarism that slips through, they are not used  as widely as they should, as with the Lushington case above, and sometimes their findings are misinterpreted or ignored.

Many publications do not currently use plagiarism detection tools and some of those who do don’t make adequate use of it, letting some cases slip through needlessly.

However, as mentioned above, there are times that a plagiarist is caught and no action is taken against them.

7. There is Nothing Wrong with Self-Plagiarism

For many, self-plagiarism is a difficult issue. Since plagiarism is about using the ideas and works of another without attribution, how can one plagiarize themselves?

However, publications and government bodies don’t see the issue the same way. Self-plagiarism raises many of the same challenges and problems as traditional plagiarism including duplicate publication and wasted funding.

Though self-plagiarism doesn’t have a direct victim the way regular plagiarism does, it still victimizes other researchers who might be denied a chance to be published or a change to get funding based on original work.

This is partially why most publications and granting authorities have policies against reusing previous work without clear attribution. It is also why, according to a recent informal survey taken during an iThenticate webinar, 85% of researchers and editors considered self plagiarism to be a form of scholarly misconduct.

Like most compelling myths, many of these seven hang on because, at their core, there is some kernel of truth (or something perceived as truth). However, the truth behind these myths is only a small part of a very complex and evolving situation. Plagiarism, its consequences and its causes, are not simple matters that can be looked at in just one light.

As we begin to dispel these myths and view the realities of plagiarism in academic writing more complexly, we can begin to devise strategies to not just catch plagiarists, but also prevent plagiarism from happening in the first place.

Hanging onto these myths and misunderstandings makes it easier for the problem of plagiarism to grow and for plagiarists to thrive.

Until that growth is slowed or stopped, it will be a drag on all research and our attempts to better understand the world we live in.