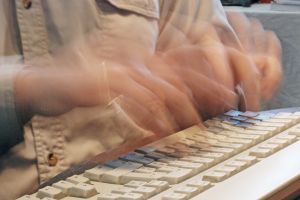 Journalism is a profession that is currently in a major state of flux.  It’s not hard to see this - just take a look at any major news outlet.  Turn on CNN and you’ll see more Facebook profiles and Twitter handles than you would at a social media tradeshow.  Open the New York Times and everyday you’ll see an increasingly heavier push towards digital subscriptions.

The changing landscape of journalism is directly related to business; what are readers & viewers most interested in?  What’s the best way to capture an audience’s limited attention span?  And more importantly, how can a publication make revenue in an increasingly digital world?  Over the past several years, major news publications and outlets have attempted to answer these questions while also facing a new breed of competition for valuable readership: online content.

Fifteen years ago online journalism was confined to a niche group of bloggers that published their work online.  These writers did not have significant readership, and they certainly didn’t have the attention of any major publications that saw them as a threat.  However, over the last decade as more and more of the populous started to go online to get their news, this small group of bloggers grew into a movement and became a formidable force.

Distribution and niche targeting became easier with the rise of social media – small online publications could now reach their target audiences with ease.  Getting revenue online also became easier with access to programs like Google Adsense, which allowed websites to make money off of ads targeted towards their readers.  In addition, ‘user-created content’ became immensely popular – articles written by people with no journalism degree or past experience in publishing.

The rise of sites like YouTube also displayed the power of user created content.  Videos shot on a $50 digital camera were getting viewership levels that rivaled that of network TV shows.  Networks needed to think fast and catch up or get left behind.

However, with the ‘anything goes’ drive of user-created content came several problems.    Plagiarism and copyright infringement became (and still are) rampant as users mixed-and-matched both written and multi-media content without attributing original sources.  Because many of these first-time authors and filmmakers didn’t have degrees in journalism, they also lacked formal training as far as journalistic ethics go.  In a digital age where any piece of content was instantly accessible and downloadable – concepts like ownership and intellectual property became negligible.

Some companies were able to utilize technology to bridge the gap between new and old.  YouTube implemented a novel algorithm that identified video segments and allowed original content owners (such as TV networks and movie studios) to make money off of ‘mash-ups.’  Large companies began to throw their hand into the user-created journalism movement, such as AOL’s Patch.com or CNN’s iReport.com.  These experiments are still budding, however, and continually face growing pains related to copyright and plagiarism.

Perhaps neither side will ‘win’ out in the end, but rather mix and match the best of past and present.  The old guard of formally trained journalists will need to get with the times and learn how to capture a younger audience’s attention online (which they clearly are already doing through social media.) And the new generation of ‘instant journalists’ will need to establish some sort of journalistic integrity in order to distinguish themselves from the masses of content creators out there.

The War Against Gibberish