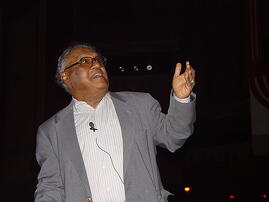 In most industries, problems start at the highest corporate level and trickle downstream to the lower levels of a company. Corporate and legal regulations are purposefully enforced to prevent problems from going upstream – starting with a low level worker and then going on to affect management, executives and investors. These measures are in place so that a company’s organizational hierarchy doesn’t collapse at the drop of a dime.

However, in the industry of academic or scientific publishing, the ‘trickledown effect’ can often move up the ranks. This is due to the collaborative nature of publishing – papers are often touched by a number of researchers and writers before they are passed on for submission. This was the case with a high profile incident of plagiarism that recently came out of India’s scientific community.

C.N.R Rao, a renowned researcher and the scientific advisor to India’s Prime Minister, has been involved in a plagiarism scandal regarding the publication of his paper in the online journal Advanced Materials. Although Rao was the co-author of the paper, it was one of his PhD students who committed the plagiarism. Basant Chitara, his PhD student, admitted and apologized for unintentionally copying text and equations from an April 2010 publication in Applied Physics Letters.

Although Rao didn’t commit the plagiarism himself, he has taken a lot of heat from the Indian media because of the problem. In some cases, rumors have even spread that the ‘entire paper’ was plagiarized after he apologized for the incident.

From Nature:  Rao says that he did go through the paper before it was submitted, but missed the problem. “Usually I write the entire paper but in this case, I had gone through mainly the results and the discussion.”

In the end, it was the editors from Advanced Materials that notified the research group of the problem; after the paper had already been published online. Although the paper didn’t end up getting retracted, it did put a blemish on record for the group, create unwanted media attention and take up valuable resources.

In response to the incident, Rao highlighted a growing problem that is occurring with greater frequency in India and China. Many researchers in these countries are unequipped to deal with an international, high pressure publishing environment. Researchers may simply be uneducated in the process of creating proper citations, which could easily prevent incidents of research misconduct. Rao asserted that all research graduate students need to be “taught how to communicate in science.”

Despite the reality that education for research writing needs to be pushed from the start, there also needs to be a system in place to prevent plagiarism from getting through to publication.  Rao’s group could have easily prevented this entire problem, which really came down to three verbatim sentences that were unintentionally left in the paper, by checking the material with plagiarism detection software prior to publishing. Instead of dealing with the fallout of a scandal, the researchers could be concentrating their efforts on vital work.