Neil Harman is known as one of the greatest writers and journalists in the tennis world. Not only has he served as The Times of London chief tennis correspondent since 2002, he’s been awarded the Sports Journalist Association “Sports News Reporter of the Year” and is a former president of the International Tennis Writers Association. 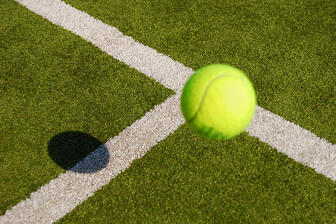 Until recently, he was also responsible for writing the yearly book “Wimbledon: The Official Story of The Championships”, a coffee table book that recaps the previous year’s tournament and is sold both at the Wimbledon gift shop and online.

However, that book has attracted unwanted attention due to allegations of plagiarism in not just the 2013 book, but also the 2011 and 2012.

According to Ben Rothenberg at Slate, Harman recently resigned from his position at Wimbledon after the organization was informed of plagiarism in the 2013 annual. According to the article, Harman was called into a meeting with Wimbledon officials in the spring of of 2014 where they presented evidence of plagiarism and asked him to step down.

Harman agreed, leaving the post he had held for ten years. He also resigned from the International Tennis Writers Association and admitted to the plagiarism in his letter of resignation. He has since also been suspended by The Times, despite no evidence that he had plagiarized any of his content written for the paper.

In that letter, he said, “I sincerely had no idea the extent to which I had let the Club, myself and my colleagues down and feel it is only right that I relinquish my membership. This is a marked stain on my reputation and (I hope) good name.”

However, the controversy only grew worse for Harman and Wimbledon as Slate investigated the allegations. After acquiring the previous three years’ yearbooks, Rothenberg discovered that the plagiarism was rampant in the books, with 30 instances of plagiarism in the 2011 book alone and a total of 52 cases of plagiarism across all three.

Harman himself expressed shock at the discovery, saying that, “As you can imagine, I’m utterly, utterly shocked by the whole thing. It’s left me numb,” he continued by saying that he “Had no idea of the extent to which I have unfairly used other people’s words.”

He blamed much of the plagiarism on the quick turnaround time needed for the books. Harman was called to write the 160-page books in just 7-10 days. A herculean feat for any author.

But tight deadlines have not been the only barb thrown at Wimbledon during this controversy. Rothenberg and others also noted that, even though the tennis organization fired Harman in the spring, the books remained on sale until the beginning of July when this years’ tournament concluded. This means Wimbledon was knowingly selling books containing plagiarized text.

This raises serious ethical questions about the obligations of Wimbledon in this case. Though Wimbledon’s investigation didn’t turn up the full extent of the plagiarism, was it acceptable of them to continue selling work that contained plagiarized text? Likewise, should they have made an announcement about their discovery rather than waiting for the allegations to come out later?

It’s fairly clear that Wimbledon was not adequately prepared for Harman’s plagiarism. Not only was their investigation inadequate, leaving a great deal for Slate and others to find, but their response was lackluster, pushing Harman out but keeping the matter quiet and leaving books on the shelf.

Though Harman is attempting to focus on the attention on Wimbledon’s tight deadlines, plenty of authors write books like this on similar deadlines without resorting to plagiarism. However, Wimbledon still has a great deal of soul-searching to do, not only over the requirements they place on their authors, but on their approach to plagiarism.

For publishers of all stripes, the Harman scandal is a reminder that plagiarism can and often does strike in the unlikeliest of places. If a coffee table tennis book can be the subject of a major plagiarism controversy, so can just about any other work.

This shows why guarding against plagiarism is more important than ever and why publishers, large and small, need to be thinking about the issue now, before they or the public catch a plagiarist in their midst.