The Principals of Plagiarism

Steven Strachan snapped up headlines this month due to his plagiarized yearbook address.

His address, which was targeted at the class of 2014 at Roosevelt High School in Long Island, NY, not only was a verbatim plagiarism of a letter written by California principal Ted Barone, but it left intact Barone’s final sentence, which read “Congratulations to the Albany High School class of 2013.” 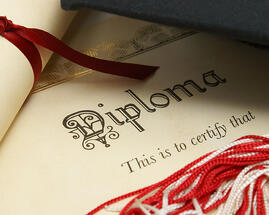 The comical blunder drew headlines from across the country and even became the butt of jokes on the NPR show, “Wait, Wait, Don’t Tell Me”. Strachan has said the plagiarism was the result of a “clerical error” and has agreed to have the yearbooks reprinted at his expense, estimated to be around $600.

However, Strachan was far from the only principal with plagiarism issues this graduation season. In Colorado, the principal of Mead High School resigned after it was revealed he took more than half of his speech from “Lean In”, a book on the New York Times bestseller list.

Likewise, in Pennsylvania, Garden Spot High School principal Matt Sanger received a 10-day suspension after it was discovered he had plagiarized his graduation speech. Finally, in Massachusetts, a superintendent Brenda Hodges has been accused of plagiarizing passages from a commencement address by Admiral William McRaven, which she denies.

This phenomenon is not unique to 2014. Every year it seems a handful of principals or deans get caught plagiarizing content in graduation speeches or related works. It’s an unfortunate annual tradition that grabs the attention of local and national media as high school seniors across the country look to their future.

Fortunately though, the problem of principals plagiarizing graduation speeches (or plagiarism in graduation speeches in general) is a rare problem. The four cases above represent just a tiny fraction of the 24,000 plus high schools across the country. Even if those cases are just 1% of the principals who plagiarize, less than 2% of all high schools will receive a plagiarized address.

However, these cases should still serve as a reminder that no one, even a high school principal, is above scrutiny when it comes to plagiarism. After all, if Chris Spence, the former director of the Toronto District School Board, can be forced out of office due to plagiarism issues, it’s possible that plagiarism can exist anywhere.

While it may seem distrusting and even demeaning to perform originality checks on documents prepared by educators at high levels, time and time again we see that such scandals, while rare, are destructive to the schools they represent.

The seniors at the schools above, while the exception, will forever have their graduation tainted by the actions of their administrators. Furthermore, their schools will be known, in national headlines, as the schools with plagiarist principals. While this isn’t fair to the students, it’s the reality they face.

If students are to truly learn the importance of academic integrity, the lesson has to start from the top, from those who already know better and are their guides. This not only means principals should not plagiarize their graduation addresses, but that those who do should be subject to the same punishments and standards that students are, showing that no one is above or beyond the rules.