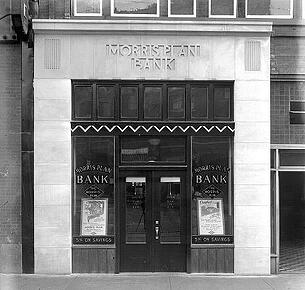 Pseudo Journals and Fake Banks, What Publishers Can Learn

In the 1920s through the early 1930s, the banking industry was in crisis. Though it may have been the “roaring twenties” and the stock market was doing great, banks were failing at an alarming rate. That problem only accelerated after the stock market crash of 1929 and it wasn’t until the foundation of the FDIC in 1933, and the banking regulation that came with it, that any relief was in sight.

Since the FDIC didn’t exist during this time, when a bank closed, deposits were lost and savings were wiped out. Though most of the banks that closed were small, rural banks, customers everywhere had their confidence shaken and bank runs were frequent during the late 20s and early 30s.

The problem was exasperated by scam artists who would set up banks, accept deposits and then simply disappear. It was also the era that invintented the Ponzi Scheme and other banking-related scams.

Depositors had little reason to trust the banks and new, legitimate banks were struggling to get off the ground.

Fast forward 80 years and academic journals are facing a similar crisis of faith. As more academics press to publish more and more research, there has been a spike in new journals coming online to meet the demand.

Though most of those journals are honest, there’s also been a rise in pseudo-academia or pseudo-journals, and also called predatory journals, that happily take applicant money and publish articles, but with little value to the the researcher or the scientific community.

At least some of these journals have taken to using names that are confusingly similar to the names of more reputable journals and even listing respected academics as supporters without their permission.

Though still on the fringes now, due to the unregulated nature of academic journals, there is a great deal of danger that these journals could grow in both their numbers and in the problems they create.

Simply put, as more and more academic publishing is done online, how will researchers know who they should trust their work to?

Looking back to the 1920s, secure, stable and legitimate banks needed a way to build customer confidence. Though established banks had their name and reputation, legitimate companies also turned to other outward signs to show their security, including most notably, their buildings.

These extravagant buildings showcased the bank’s clout and prominence, improving the trust and, most importantly, the confidence a potential customer would have in the bank. Simply put, a bank that could support such grand architecture was not likely to disappear tomorrow.

To date, academia has responded in a much different way. Spearheaded by Jeffrey Beall, a librarian at University of Colorado Denver, the community has worked to identify and list the known predatory publishers.

Beall has compiled a list of over 240 publishers and 120 known journals that he considers predatory and licenses it under an open license that encourages republication.

Beall’s work is incredibly important and the fact that he’s added over 200 publications in just the last year shows how serious the problem is. However, a blacklist does little to help new, legitimate, publishers build trust.

With the problem of predatory publishers and pseudo-journals as large as it is, any new journal, on the list or not, is going to be mistrusted.

New and lesser-known journals can pull a page from the 1920s banks and work on ways to make it clear that they are legitimate. However, where the banks had to showcase their wealth and stability, journals have to highlight their ethics.

There are several possible ways that they can do that including:

The challenge in all of this is to present the information in a way that can not be trivially replicated by those who haven’t earned it legitimately. Anyone can copy a logo, but only legitimate members can link to a profile on an organization’s website.

These signs need to be placed in obvious locations on a publisher’s website if they are to work, putting verifiable proof of legitimacy in front of anyone who is learning about the publisher’s work.

Of course, part of the challenge is that academics are going to have to change as well. Instead of assuming that journals are legitimate, it’s going to be important for researchers to verify the authenticity of publications they want to work with, especially before handing over their publication fee.

It’s a sad truth, but with more and more publishing taking place online and no regulation to keep bad publishers in check, researchers need to realize that anyone can set up a site with an impressive title and claim to be a journal.

Much like the legitimate banks in the 1920s, legitimate journals need to develop their own symbols of authenticity. In fact, it may be more important for journals as, unlike banks, there’s no regulation on the horizon to help straighten the problem out.

The solution has to come from within academia or it may not come at all.

CTRL-V Plagiarism in the News: Towson Professor Investigated Over Allegations of Plagiarism