Plagiarism in the Big Easy 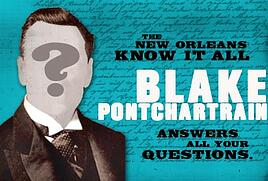 Blake Pontchartrain was, until recently, one of the best-known names in New Orleans journalism. A columnist for an alternative weekly paper The Gambit, his Q&A column was one of the more popular attractions in the paper. In it, he would answer questions about New Orleans and its history, including detailed ones that left many in awe at the breadth of his knowledge, or at least his research skills.

But Blake Pontchartrain had two problems. First, he didn’t exist. Second, he was a plagiarist.

Trouble started for the fictional columnist after another journalist, James Philip Karst at the Times-Picayune, the city’s major newspaper, noted similarities between one of Pontchartrain’s columns and content posted on a website operated by the state government.

After further investigation, other examples were uncovered and The Gambit was notified of the issue. The paper responded quickly by taking down all Blake Pontchartrain’s columns and stating that the column was “a composite column that has been written by several contributors over the years,” and that the plagiarism “can all be attributed to a single writer, who will no longer be working for The Gambit.”

As a precaution, the newspaper has remove all Blake Pontchartrain columns from its site.

For The Gambit, this scandal has been nothing short of a disaster. Though their extremely quick action may help save their reputation, it’s resulted in hundreds of columns being removed, including many that were not plagiarized, and some of the paper’s most popular content being taken down.

Perhaps worst of all, one of the best known names at the paper will cease to exist.

It’s also unfair to the other reporters, the honest ones, who worked under the Blake Pontchartrain name. Their work was removed as a precaution, albeit likely a necessary one, making it so that their prior work ceases to exist.

Furthermore, since they haven’t named the writer who committed the plagiarism, none of the other journalists who wrote the column will likely be able to admit they wrote under that name for fear of being considered a plagiarist themselves.

But perhaps what is most interesting about the scandal is how it happened. It only took one sharp-eyed reader to spot the similarity and investigate the matter. The fact it was a competitor that made the discovery only makes things worse for the paper.

To be clear, The Gambit, while popular, is not considered a major newspaper and Pontchartrain’s column was not particularly political and the discovery was coincidental, involving the reporter happening to read the two works back-to-back while doing research.

These types of scandals can happen to any newspaper at almost any time and, for smaller papers, they can be especially hard-hitting as The Gambit has lost a significant percentage of its most popular content.

It’s another illustration of why it’s important for editors at all publications to find ways to guard against potential plagiarists. If The Gambit had been able to detect these misdeeds before they were published, not only would the column likely still be going strong, but the site would not be missing a significant portion of its content.