Though we are in the early weeks of 2015, we already have our first major plagiarism scandal and termination in journalism.

Jared Keller, the now-former news editor for the website Mic, was fired after Gawker media uncovered at least 20 passages where he had borrowed unattributed text from various sources including The Atlantic, Reuters, AP, The Washington Post and more without citation. 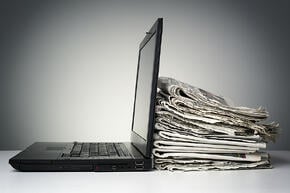 had no attribution at all.

Within hours of the article being posted, word came out that Keller was fired from his position and Keller posted a Tweet apologizing for the incident, saying, “I want to apologize to my colleagues, friends, family and every hardworking journalist out there. There’s no excuse for my sloppiness.”

Mic’s co-founder and editor-in-chief, Jake Horowitz, released a statement of his own saying that “Mic takes responsibility for allowing this to happen. We’re going to use this as an opportunity to improve as an organization and we’re already soliciting candid feedback from our editorial staff about what we can be doing better.”

The story is echoes of Benny Johnson/Buzzfeed case from July of 2014. In that case, Benny Johnson, the site’s former political editor, was fired over allegations of plagiarism. That story was broken by Our Bad Media.

In August 2014, yet another similar case involving the viral content site A+ was broken by the Daily Dot. In that case, while a great deal of content was deleted, it is unclear if anyone was fired or disciplined.

What is most unusual about this most recent story is the speed with which it unfolded. Less than a day passed between the news story breaking and the termination of Keller. Johnson, by contrast, was defended initially after the allegations arose but was eventually fired after additional details came to light.

Keller’s dismissal was so quick that Mic’s investigation, according to their announcement is ongoing.

But with these three cases, a pattern of plagiarism enforcement is emerging, in all of the cases the plagiarism was detected by another publication, posted publicly on their sites and enforcement, to whatever end, was metered out quickly.

The days of an editor at one publication contacting another, as what happened with Jayson Blair, are largely gone. If a publication doesn’t detect the plagiarism themselves, as with Marie-Louise Gumuchian, one can expect the plagiarism story to be public almost immediately after discovery.

This is because plagiarism allegations are now big stories by themselves. Teardowns of editors, journalists and publications is big business. The impact this has on plagiarism investigations is clear. Where someone like Blair would have their allegations researched for weeks, now the process can take only days or even hours.

The pressure is on publications not just to avoid plagiarism, but to respond quickly when allegations arise. This makes it more crucial than ever to have policies and procedures in place for such situations, rather than trying to figure things out after a new story has broken.

After all, if more plagiarism controversies are to unfold in the public light, the publications involved will be judged on how they respond. This makes preparation the key to surviving such an incident and moving on quickly.

As Buzzfeed and, most likely, Mic have shown us. These public ordeals can and are forgotten, but only with swift action, action that can only come from planning.