Last month, Gawker reported that Mic news editor Jared Keller had plagiarized at least 20 passages in his writing for the online publication. Keller was quickly fired from his job and most agreed that his career in journalism was, most likely, over.

However, Talking Points Memo recently reported that Keller has found new work having published a series of articles for publications such as The Atlantic, Pacific Standard and The Daily Dot, the first of which went online barely a month after his firing from Mic. 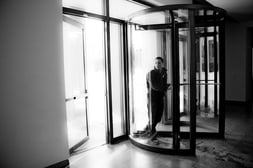 Johnson who, 43 days after being fired for plagiarism, found new full-time work at the National Review as a social media editor and, eventually, author.

The outcomes of these stories are vastly different from those of Jayson Blair and Jonah Lehrer, both of whom have been effectively blacklisted from journalism, struggling to find any work in the field.

While many will argue that Keller and Johnson both took a hit in their careers, it’s obvious that the industry’s response to plagiarism is not nearly as strong or as unified as it was just a few years before.

Part of the reason is that the nature of journalism itself has changed. As the industry has struggled to adapt to the Internet and the geographic monopolies have waned, competition has soared. Every outlet is in competition with every other outlet all the time.

Where Jayson Blair represented a plagiarism scandal for the New York Times, Benny Johnson and Jared Keller are both isolated from their publications. This means that publications take on less risk by hiring (hopefully former) plagiarists, especially on a freelance basis, and can gain from the built-in audience they still have.

This makes it so that, while plagiarism is certainly not good for a career in journalism, it isn’t the death knell it once was. Plagiarists can and will continue to find new homes if it is financially viable for someone else to hire them.

In the end, the decision to hire or not hire a plagiarist is a business decision. That hasn’t changed. What has changed is that the industry has shifted in ways that make it more likely for plagiarists to land on their feet, by pushing the economics in their favor.

For that to change, it will have to be the consumers, not the publications, that lead the way. Consumers will need to A) Be aware of plagiarism issues in journalists and B) Care enough to avoid and punish publications that employ them.

Because as long as there is money to be made hiring plagiarists, at least some companies will do it. While forgiveness may not be immediate, it is inevitable if it makes good business sense.

Plagiarism: A Threat to the Integrity of Scientific Record