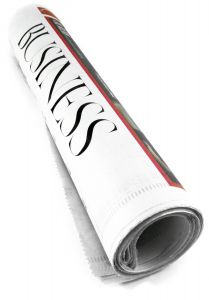 The press release has long been the preferred method for a business to announce any news, announcements, products or breakthroughs.  This document is often written in a standardized format, laying out the major segments of the story and providing easily digestible quotes for journalists that want to use the piece as a foundation for their coverage.

In a sense, the press release is the vehicle driving the symbiotic relationship between the news media and a company.

Sometimes, due to the fact that the press release is ‘there for them,’ writers can take the material for granted.   Press release plagiarism is something you’ll see fairly often, but in many cases goes unnoticed.  Let’s start from the beginning:  duplicating material from a press release  is indeed plagiarism.

“A good reporter will use the press release as a starting point, going on to do his own reporting and gathering his own quotes.  If you do use information from a press release, however, the rules of attribution apply.”

One of the most recently popularized cases of press release plagiarism involved New York Times’ writer Zachary Kouwe, who plagiarized part of an SEC press release (along with other material).  Kouwe gave one of the standard plagiarism excuses, saying he was collecting information from several sources and simply forgot to remove or rework the raw material.

It’s not surprising that press releases are plagiarized, given the frequency that they are used as ‘raw material’ for reporting.  Press releases contain a large number of quotes, facts and numbers, which are the bread and butter of any journalist.  Many of these segments are getting cut-and-pasted directly into stories, probably with the good intention of reworking them post-facto (as Mr. Kouwe stated).

Given deadline pressure and high volume publishing, it’s completely logical that unattributed content ‘slips through the cracks.’ Unfortunately for reporters and publishers, these cases of accidental plagiarism are no longer going unnoticed.

Companies can now run their press releases through plagiarism detection programs to see which writers or bloggers used their materials.  Competitive newspaper publishers can attempt to bring down their rivals by ‘catching them in the act.’  Even individual readers can detect instances of plagiarism and report them to the authorities.

The real solution for writers and publishers?

Catch yourself before anyone else does.  If it is indeed a case of accidental plagiarism, it should be just as easy for you to scan a piece (whether using technology or extra hours) and find any duplicate sections that might have gone unnoticed.

Preventing Plagiarism: A Seal of Approval for News Publishers