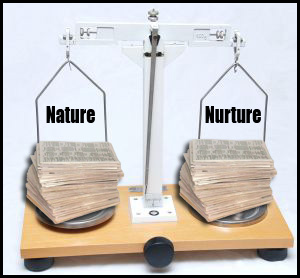 Are recent incidents of newspaper plagiarism examples of Nature, something that would ‘naturally’ occur due to the inadvertent duplication of content, or Nurture, where plagiarism is happening because of the publishing environment writers are placed in?

Echoes of this question have surfaced over the last several weeks as the conversation on the New York Time’s reluctance to use plagiarism software has continued.

Contrasting points of view have come out of various blogs, including the Columbia Journal Review and True/Slant.  One notable entry into the discussion is the New York Times (which is the primary subject of the controversy after NY Times journalist Zachary Kouwe was caught plagiarizing Wall Street Journal content).

“Such software is in wide use in the academic world, but has few takers in the news industry.  Silverman said it makes many journalists uncomfortable because it seems to assume guilt.”

True/Slant writer Paul Smalera takes an opposing view to Silverman, asserting that in order to stop plagiarism from occurring within publications like the New York Times the entire environment needs to be modified:

“I would bet, with no inside knowledge, that the fiercely competitive Times, especially its Business section, especially DealBook, is loath to credit competitors, because it looks weak. So editors push for original-sounding reporting, and Kouwe massaged wire copy and blog posts to meet deadlines and word counts.”

Smalera makes a good point that Kouwe may have been on an unrealistic deadline to write up to 7000 original words per week.  On top of that, he was writing for the NYTimes business blog, DealBook, which reports on business facts that can only be recounted in so many ways.

In other words, the publication may have inadvertently created an environment that ‘nurtured’ plagiarism.

In order to protect their current market share, the Times needs to continue at their marathon pace: placing resources on and offline, covering a variety of topics, as well as managing journalistic integrity.

Increasing production and pushing deadlines may have put a strain on journalistic integrity, and in turn produced plagiarism.

On the flip side, within a large publication like the Times that distributes a huge amount of content across a variety of mediums, would plagiarism naturally occur even if the publishing environment were modified? Are some of the recent writers who claimed they inadvertently copied figures from another source telling the truth?

Of course, in the real world, there are a various other factors that come into play, including a writer’s access to previously published content.

The most likely answer probably falls within the gray between nature and nurture.

More instances of plagiarism may be cropping up due to the highly competitive news media environment, but some plagiarism would probably occur in different circumstances regardless.

Within large organizations like the New York Times there are a variety of reasons plagiarism can occur:  inadvertent plagiarism can slip through the cracks, a normally upstanding journalist can be pushed too hard with deadlines, or a ‘bad apple’ journalist lacking in morals can be mistakenly hired.

The variety of different ways and reasons plagiarism happens is exactly why plagiarism software is not something the Times, or any other large publication, should overlook.  With their logistic resources spread thin in such a competitive environment, plagiarism software is one piece of the puzzle that could  be massaged into their editorial process to provide a safety net.

This not only protects the integrity of the paper by preventing future cases of plagiarism, but also ensures readers that providing unique content is of the utmost importance to the publication.

As the New York Times tries to keep up with the rest of the industry and moves into a new era of publishing, they should keep in mind that the integrity of the unique content they provide is perhaps their most valuable asset.

Preventing Plagiarism: A Seal of Approval for News Publishers