Should Bing Attribute Their Search Results to Google? 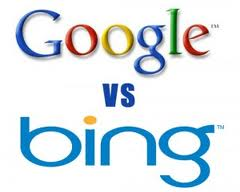 Google recently revealed some evidence that shows that Microsoft Bing  may be copying their search results.

The ‘search wars’ between Google and Microsoft have been pretty heated over the past few years.

Given the fact that Bing is actually utilizing some of Google’s search results, isn’t this marketing campaign a bit hypocritical?

Google’s accusations come out of a series of tests they ran to see if Bing was copying their results.   Essentially Google’s search team planted random results for various gibberish search queries, and then checked to see if Bing returned the same results.

We created about 100 “synthetic queries”—queries that you would never expect a user to type, such as [hiybbprqag]. As a one-time experiment, for each synthetic query we inserted as Google’s top result a unique (real) webpage which had nothing to do with the query.”

The Financial Times spoke with Google’s head of search, Matt Cutts, about the issue, who wasn’t shy at all about his accusations.

From The Financial Times:

“Cutts showed me screen shots of searches for nonsense terms on Google, for which Google had planted dummy results – and then shots of similar searches on Bing two to three weeks later, which showed the same dummy results being returned.”

These duplicate results seem to stem from behavior tracking technology that Microsoft implements in their Internet Explorer Bing Toolbar. Microsoft’s VP of search products, Harry Shum, claims that they are simply using the data that users provide to create better search results.

Even if this is the case, shouldn’t Microsoft be required to let their users know where these results are originally coming from (with a bright blue link back to Google)?

Providing attribution to an original source of information is standard practice.

In literature or publishing, people use external references and research all the time to support their material.  And it’s usually crystal clear: if you use an external reference without attribution, it’s plagiarism.

Microsoft is essentially utilizing an external reference for information they provide without telling people where they got it.

If they continue to move forward with this practice, perhaps they should begin to attribute Google (or anyone else) for the specific results they are duplicating and displaying.