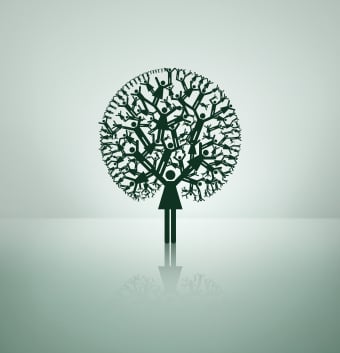 d an article that cited a plagiarism study from Turnitin.  Essentially, Turnitin scanned 40 million student papers and then took a survey of where the majority of the online duplicate content matches came from.

One of the most groundbreaking statistics from the survey was the large portion of plagiarized materials coming from social networks like Facebook.

“One-third of all unoriginal content in student papers came from social networks, including Facebook and all of the various “content-sharing” sites where users post and share information, such as Answers.com. It’s an interesting finding, because typically, the content of those sites is unverified and unsourced. Users may say pretty much whatever they want, factual or not.”

Although this statistic is eye-opening, it also isn’t very surprising given the amount of time people (especially college students) spend on social networks nowadays.

Facebook is formally called a ‘social network’ because much of the information getting passed around is of a social nature (i.e. relationship statuses, upcoming events, stuff you like).  However, a large portion of the information shared also includes references to news articles, quotes, videos, Wikipedia entries and various other sources.

Users share this type of referenced information much like they share social information – informally.   In this fast-paced web environment, with much of the social sharing taking place via mobile devices, it isn’t practical for users to create formal citations for every reference.

On sites like Yahoo! Answers many users are attempting to accrue ‘points’ and need to answer as many questions as possible in a given time frame.  Although there is a section to source references in Yahoo! Answers, it isn’t required or thorough.

So, the question is, should these websites require proper attribution?

And if they did, what would happen to the world of informal/casual speech on the internet if they did enforce such rules? Would the dialogue be improved?  Would these sites enhance credibility?

The recent case of the ‘fake’ Martin Luther King Jr. quote is a perfect example of how ‘who said what’ is getting lost in the social shuffle.   The quote spread rapidly across Facebook and Twitter in response to Osama Bin Laden’s death.

However, it turned out that the most relevant part of the quote was getting falsely attributed to Dr. King; it was actually a comment from a 24-year-old teacher that was fused into MLK’s quote and then injected into the social web.

As more and more information becomes a social commodity, we need to keep our eye on where that information originated.

Attribution, in an age where content is fast becoming difficult to filter, could be the key to separating the grain from the chaff.

Minkel, Elizabeth.  ”How’s That?  Twitter and the Fake M.L.K. Quote.” The New Yorker. May 4th, 2011.  http://www.newyorker.com/online/blogs/books/2011/05/misquotes-martin-luther-king-bin-laden-twitter.html