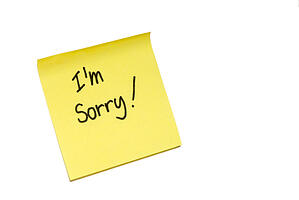 Ever since we were little, we’ve been taught that the proper way to redeem ourselves after doing something bad was to say “I’m sorry.” Whether it was an accident or an intentional wrongdoing, “sorry” always made things better.

Today, people say sorry for almost everything; the phrase has become almost as much a verbal reflex as saying “hello” or “goodbye.”

This apologetic trend is especially manifest in our media outlets, newspapers, politicians, celebrities and researchers.  If a paper publishes an egregious fact or quote, they make up for it by publishing a correction in the next issue which includes a timely “sorry for messing up.”

A celebrity scandal is often remedied by the culprit ‘apologizing’ to the American public by checking themselves into some sort of rehabilitation center, only to mess up again after checking out.

Plagiarism is one problem that has been completely wrought with apologies for stealing other people’s work.

The cases of ‘I’m sorry for plagiarizing’ range across a variety of sectors including major media outlets, political campaigns and science publications.

A few recent public plagiarism cases have involved AOL’s online news site Patch.com, which has local hubs within cities across the US.

Patch employs thousands of freelance journalists to write local content.  Although Patch articles are relevant and local, they also have been found to be unlawfully plagiarized multiple times this year.  The most recent case involves Patch’s Silicon Valley branch, where a freelance writer duplicated a story from the blog VentureBeat.com.

“While we expect every freelancer to practice the highest standards of journalism, we also audit to make sure that all Palo Alto Patch content is original or fully and properly attributed. The writer has been told that taking work of other writers or news organizations without attribution is absolutely not acceptable. We have apologized to VentureBeat, whose work was copied. We apologize to you, the reader.”

It’s not that saying “I’m sorry” isn’t a good thing in general. Of course, it makes sense to apologize if you’ve hurt someone or done something that is clearly wrong.

However, when apologizing becomes the primary defensive mechanism to correct mistakes – this is where a systemic problem can begin.

Eventually, apologizing can overtake the necessity of preventing the problem from occurring in the first place.

It’s clear that Patch has an imminent plagiarism problem due to the large quantity of content they are distributing and the freelance system they are utilizing. The organization could queue up a thousand apology letters, but that wouldn’t prevent plagiarism from happening again and again.

Patch, and any other organizations that have apologized for plagiarism on numerous occasions, need to stop apologizing and start thinking of new ways to prevent plagiarism before it occurs.