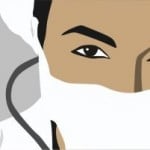 Doctors have always been held in high regard in our society, for good reasons. Medical doctors are considered some of the most qualified professionals in any field or industry.  Doctors undergo years, sometimes even a decade, of study, training and practice before they are fully qualified.  Residency is often considered the most important part of a doctor’s training, providing a time to practice medicine while developing a specialization.

We also demand a massive amount of qualification from doctors because we put our lives in their hands everyday.

It is extremely dangerous to the public if a practicing doctor who isn’t qualified slips through – either by deceit or a lapse in judgment within a specific medical governing body.

A recent study published in the Annals of Internal Medicine revealed that 1 out of 20 residency applications to the Harvard Teaching Hospital were found to be plagiarized.

Residents of the Harvard Teaching Hospital end up actively practicing at some of the most highly regarded hospitals in the world, including Brigham & Women’s Hospital in Boston.

Those plagiarized residency essays that go undetected are essentially letting unqualified doctors through the doors, into the practicing medical field.

Boston.com recently reported on how the study came upon their findings:

“To reach their conclusion, the authors examined almost 5,000 personal statements submitted as part of applications to the five largest residency programs — internal medicine, anesthesiology, general surgery, obstetrics and gynecology, and emergency medicine — at the hospital between September 2005 and March 2007. Depending on the specialty, between 28 and 45 percent of applicants nationwide sent their applications to the Brigham, so the authors believe their results mirror what may be happening across the country.”

If this is a trend within residency applications across the country, it is certainly alarming.

Imagine the uproar if a hospital declared that one out of twenty of its practicing doctors were unqualified; they had skipped some integral portion of their training, and yet they would still be treating patients. The residency application is an integral portion of a doctor’s training and admittance to a prestigious medical program – they would normally be considered unqualified if their essay didn’t ‘cut the mustard.’

Plagiarized essays are falsely representing residents who are accepted into the program and then go on to practice.

Not only is the ratio of plagiarized essays alarming, but also the specific portions of the essays that were found to be plagiarized.   Some of the most personal segments which included stories and anecdotes of student experiences with illness and death were found to be completely fabricated.

Although the medical profession is often considered to be strictly scientific and data-driven, in reality it is incredibly personal.  In many cases, a good doctor should not only be able to diagnose and cure, but also be able to deal with patients on a ‘human level.’

A resident who completely disregarded this portion of the essay and plagiarized somebody else’s work should not be considered fit to practice.

Plagiarism prevention can come about in two ways.

Using these plagiarism prevention methods, we can ensure the integrity and quality of medical practitioners.