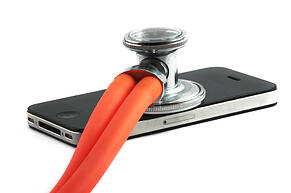 According to a recent report in The Register, three doctors, Dr. Afroze Khan, Dr. Zishan Sheikh and Dr. Shahnawaz Khan in the UK are being brought before Medical Practitioners’ Tribunal Service (MPTS) and face either withdrawal or suspension of their licenses to practice medicine over allegations of plagiarism.

However, what makes their situation unique isn’t that the three are accused of plagiarizing research in a journal or even in a book that they wrote. Rather, the allegations center around an iPhone app that they had published.

The trio released an app named Critical APPraisal, which is designed to help doctors evaluate clinical evidence to better diagnose and treat patients. However, the MPTS is evaluating whether the app, in its “Guide” section, plagiarized the better-known work The Doctor’s Guide to Critical Appraisal.

The doctors had released their app in July 2011 after nearly a year of development. One of the trio is also accused of posting a review in support of the app without disclosing his involvement or financial interest in it.

But while the case may be novel at the moment, it almost certainly won’t be much longer. Thanks to the Internet and other advancements in technology, doctors, researchers, scientists, etc. are not just publishing research papers and books, they are also creating videos, developing apps, building websites and getting their work out through multiple new outlets.

Unfortunately, these new tools for communication come with new ethical concerns. Plagiarism, for example, can happen just as easily in the text of an app or the script in a video as it can a research paper and, as this case shows, can lead to the exact same potential repercussions.

However, it doesn’t end there. In many ways, the dangers and risks are greater with this new technologies. For example, In this case, there could be legal repercussions in addition to professional ones. If the author of The Doctor’s Guide to Critical Appraisal, Dr Narinder Kaur Gosall, were to decide that her copyright had been violated, she could sue the physicians for infringement.

Even if the lawsuit didn’t gain traction, it would still likely take years and thousands of dollars to see through, causing further headache to the physicians during an already difficult time.

As such, it’s going to be increasingly important for physicians and researchers to remember that the ethical rules apply to all elements of their professional work. The repercussions for violating those rules can be just as, or even more, severe than breaking them in more traditional ways.

As for the trio of doctors, it is unclear what the outcome of the tribunal was. Press and the public are excluded from hearings under MPTS rules, unless the interest of the public outweigh the interest of the board and the doctors involved, which is unlikely in this case as there are no public safety issues.