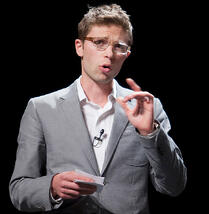 It’s been four months since Jonah Lehrer’s disastrous “apology” speech at an event hosted by The Knight Foundation and, though Lehrer hasn’t been in the spotlight much, he apparently has not been sitting idle either.

Last week it was discovered that Lehrer had been shopping around a book proposal on the science of love. Soon thereafter it was confirmed that Simon & Schuster has picked up the book. When asked about his decision by The New York Times, Jonathan Karp, the publisher at Simon & Schuster, said, “He’s a writer, and an unusually talented one. Everyone deserves a second chance."

Others, however, are not so willing to forgive Lehrer. PLOS, on its blog, called the book deal an “injustice” noting that Lehrer violated the basic tenets of journalism and gets a second chance at success while many honest journalists toil in relative anonymity. Gawker was even more harsh with its criticism, saying Lehrer is still a “crook” and that Simon & Schuster is his “accomplice”.

Regardless, the Internet is not waiting for the book to be released to determine if Lehrer is a changed man or not. At Slate, Nina Subin delved into Lehrer’s 62-page book proposal and found a series of suspicious passages, portions of the proposal that seem to be a close paraphrases of a recent essay written by Adam Gopnik, who was at The New Yorker at the same time as Lehrer.

Subin also notes that the thesis of the book uses language that closely mirrors a speech Lehrer gave in 2011.

Though the evidence of plagiarism and self-plagiarism isn’t the most convincing, even in Lehrer’s history, the fact that there is any concern at all is striking. Lehrer is being given a second chance to write in his field, a chance few feel he deserves, and his new book is drawing plagiarism allegations before it is finished.

Both Lehrer and his publisher have to be aware that every word he writes will be scrutinized, fact checked and plagiarism checked over and over by an angry public. For Lehrer to include questionable passages in his proposal is a sign that he has not changed and that his “standard operating procedures” he touted in his speech four months ago are not working and have already failed to prevent plagiarism issues.

But the bigger problem with Lehrer’s return, especially after less than a year after the scandal broke, is the message it sends others. Lehrer is being allowed to return to his writing incredibly quickly after his downfall and without as much as a complete recounting of his misdeeds. That sends a clear message that you can violate the core values of both journalism and authorship and the punishment is a mere speed bump in your career.

To be clear, this is not the first time this has happened. Jayson Blair famously got a six-figure book deal after his disgrace and wrote a book that eventually bombed. While Lehrer’s editors may be able to forgive him, as Blair’s case showed, the audience might not be as quick, especially if he keeps making missteps like having questionable passages in his book proposal.

But no matter what Lehrer does next, one thing is clear, others will be watching him with distrust  and checking his work, looking for the next problem. Lehrer may be able to publish another book, but he’ll never be able to escape what he did and the scrutiny that comes with it.