The Internet has opened up countless new avenues of both creative and scientific collaboration. It is now possible for two people to work together to create something new without either of them having to see or even be aware of the other person. Best of all, this can be done with permission and within the bounds of both law and ethics. 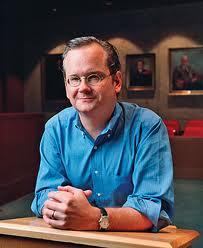 This culture of remixing, mashing up, building upon and transforming is commonly referred to Remix Culture and it’s a notion that has been changing the way the world looks at copyright, authorship and attribution.

One of the seminal books on Remix Culture has is Remix by Professor Lawrence Lessig. Lessig was no stranger to the Remix Culture long before writing the book. In 2001, he was founding board member for the Creative Commons Organization, a group that drafts free-to-use open licenses that make remixing a legal and cooperative effort.

Prior to his work with the CC Organization, Lessig was a professor of law at both Chicago Law School and Harvard Law School. He also worked with Judge Richard Posner, who would go on to write his own book about plagiarism and authorship, and Justice Antonin Scalia.

I recently had the chance to ask Professor Lessig about his experiences with Remix and his views on authorship in the digital age.

According to Lessig, he first became interested in copyright and attribution issues, “After Congress passed the Sonny Bono Copyright Term Extension Act.” The 1998 law extended copyright protection for works for twenty years, making it so that works of individual authorship would be protected for the life of the author plus 70 years, instead of 50 year, and works of corporate authorship would be protected for a flat 95 years, instead of the previous 75 years.

The book, he said, was the result of an evolution of his thinking over the decade that passed since he began delving deeper into the issues, looking heavily at the way the Internet had not only changed content distribution but also content creation.

According to Lessig, attribution isn’t just a means to give original authors credit, but for the remixer to showcase their prowess, highlighting the sources they pulled from in contrast to the new work they created.

Despite the importance Lessig places on attribution, he does not feel that moral rights are the answer. Moral rights are a set of rights outside of copyright that guarantee the author the right to be attributed, to control how their work is used and prevent destruction of it in some cases. Most countries adopt some form of moral rights but the U.S. only has a very limited version that is restricted to just visual artists.

“It would confuse things to add a ‘moral rights’ protection, since that means so many different things in different counties. I would simply add to the Act what Creative Commons requires — attribution.”

However, he also feels that extra legal processes can also be helpful in dealing with attribution issues, saying that authors can protect their right to attribution, “By shaming people who don’t.” He goes on to say that he doesn’t feel making the removal of attribution a felony would do a great deal of good.

Despite the challenges that attribution faces in the digital age, Professor Lessig remains optimistic about the future of Attribution, saying that it is still a strongly-supported value.

And that optimism likely comes from his experience with the Creative Commons Organization. When they introduced the first versions of their licenses in 2002, the licenses allowed content creators to choose whether or not they wanted attribution when others made use of their work.

However, after two years, it was clear that most content creators wanted attribution for their work, with over 97% opting for such licenses. In response to that, in version 2.0, released in 2004, the Creative Common Organization made attribution standard with every license.

So while the Remix Culture may be seeking to revolutionize the way work is created, it still keeps attribution as a core value and one it seeks to protect for a long time to come.

Social Content: Can the Originals be Lost in the Chatter?