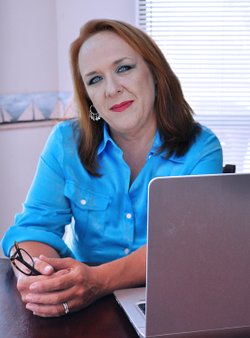 Laura Harner is an extremely prolific author. Having published an average of fifteen novels per year over the past 5 years, she is an independent author who self-publishes her work through a variety of online retailers, most notably Amazon.

New York Times bestseller romance author Becky McGraw posted on Facebook that she had observed her work being plagiarized. Though McGraw didn’t name Harner in her initial post, a blog post by fellow author Jenny Trout did.

That sparked a backlash from the romance author community, that eventually got the story into the mainstream media, including The Houston Chronicle, The Toronto Star and The Guardian.

What makes the case unusual is just how Harner is accused of plagiarizing. Where Harner’s books feature almost exclusively gay romance, McGraw’s feature heterosexual relationships. However, according to analysis cited in Trout’s post, Harner took the original work, including many lengthy passages, and simply changed names, places and the sex of one of the characters.

In a statement to The Guardian, Harner admitted that she had “made mistakes” and said she was working to fix them. She also promised to have a more complete statement within the week. However, so far, no further statement has been posted.

Harner, however, has removed about 10 books from her Amazon store, taking her total of books published down to 67.

Still, it seems that the impact the scandal has had on Harner, at least publicly, is minimal. Of the books that remain, none have abnormally low reviews and none of her profiles have a mention of plagiarism in the comments.

The only place Harner has not been able to escape the story (or at least police the comments) has been her Facebook page, where numerous comments exist accusing her of plagiarism and pointing to links on the story.

However, there’s actually precious little that can be done to a plagiarist like Harner. Short of suing her for copyright infringement or using copyright notices to remove infringing works, there isn’t much that the book industry, or even victimized authors, can do.

As an independent author she doesn’t answer to an editor, there’s no way to revoke her publishing contract or force her to retract any books she’s not legally required to.

In short, there’s nothing stopping Harner, or any author like her, from simply removing the works she’s legally required to and continuing with her career with most of her library intact.

And this poses a real challenge for the book industry moving forward. As more and more authors take the self published route, not only do they not gain the benefits that publishers and editors provide, but the book industry loses the protections that they offer.

Finding ways to maintain and enforce integrity is going to be a challenge for authors in these increasingly do-it-yourself times. When the authors have no one to be accountable to (and ebook sellers, including Amazon, have shown a reluctance to step in), the next chapter of the book industry could be one fraught with plagiarism and ethical dilemmas if it doesn’t find a way to address these issues.

A Publisher’s Role in Defense of Plagiarism