According to a recent report in the Times Higher Education, prominent sociologist Zygmunt Bauman has been accused of plagiarism in his most recent book, Does the Richness of the Few Benefit Us All?

The allegations themselves are fairly standard. In the book, Bauman is accused of quoting from outside sources and, though he often attributes those sources, makes no indication that he’s lifting text verbatim.

What makes the allegations more unusual is two factors. 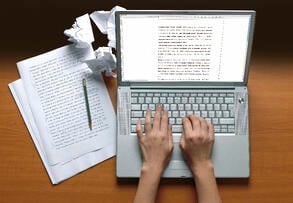 First is the accuser. Rather than being a publisher or fellow researcher, the accuser is Peter Walsh, who is a PhD student at the University of Cambridge and self-described “huge admirer” of Professor Bauman.

Walsh said he discovered the plagiarism when he questioned the use of a 1998 Human Development Report in a book published in 2013. When he investigated, Walsh found that the mention of

the report was actually plagiarized from a 2012 interview transcript in the Asia Times Online.

That prompted Walsh to investigate further, gathering other examples of copying and presenting them to the Times Higher Education. However, in doing so he admitted that it was “risky” to speak out as Professor Bauman is a well-established and respected sociologist with “a number of allies built up over an exceptional career.”

The other interesting element is Professor Bauman’s response. Bauman, after being shown the evidence, said, in part, “I failed in those 60-odd years to spot the influence of the obedience to technical procedural rules of quotations on the quality (reliability, effectiveness and above all social importance) of scholarship: the two issues that Mr Walsh obviously confuses.”

In short, rather than either deny that he plagiarized or apologize for any transgressions, Professor Bauman opted to attack the rules and ideals that govern attribution in research. To be clear, Bauman did say, “Never once failed to acknowledge the authorship of the ideas or concepts that I deployed, or that inspired the ones I coined.” However, he also indicated that the exact rules of citation were technicalities and, in the end, unimportant.

However, Bauman’s missteps were not mere technicalities in nature. This isn’t an issue of him not following the exact citation style or citing content inadequately for the medium, rather, it’s an issue that he failed to cite the use of direct language from others and, in some cases, citing only primary sources while copying heavily from secondary ones.

This type of omitted attribution doesn’t just violate a technical rule, it breaks the chain of attribution. Every researcher is standing on the shoulders of those who came before them and it’s important to know exactly what a work is built upon. This chain of attribution is crucial not just to maintain authorship and give credit for other’s work but to ensure that others reading it can verify the work is sound.

The problem is compounded by the fact that, in Bauman’s case, many of the sources were questionable. Not only was he citing outdated reports, but also using questionable sites like Wikipedia.

These are the types of issues that can call research into question but, without proper citation, they might never come to light. While the rules of citation might seem to be archaic, especially in the age of the Internet, the scientific community has to be cautious with changing those standards because they are so fundamental to how new knowledge is obtained.

After all, new knowledge is nearly useless unless we know what that new understanding is built upon. Like a skyscraper with a bad foundation, research without proper citation sinks into itself and adherence to citation standards is not just a technicality, but a requirement for creating sound research.

As respected as Bauman is and as much experience as he has, the rules of citation remain just as important today as they did 10, 20, 100 years ago and they can not be forgotten or easily dismissed.