Earlier this month The Australian announced that it was firing psychiatrist and columnist Tanveer Ahmed after a Twitter user accused him of plagiarizing a paragraph from a recent column from the U.S.-based website Prospect. 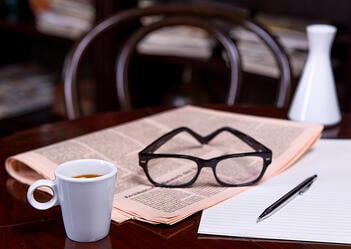 While the case might be easily dismissed as yet another case of a journalist being caught plagiarizing, the story is unusual for at least two reasons.

First, the article was already the subject of a great deal of controversy over statements made about domestic violence. That controversy had already led for calls for Ahmed to resign as an ambassador for the White Ribbon organization, a men’s organization campaigning against violence against women.

After originally refusing, he eventually agreed to step down from the role.

However, the second wrinkle is that this was not Ahmed’s first run in with plagiarism. He had been fired for plagiarism once before, just over two years ago.

In that case, Ahmed was writing for The Sydney Morning Herald, which is published by Fairfax Media. There it was revealed in several of his articles he had used, without citation, content from other publications.

But where the majority of serial plagiarists in journalism leave the industry, at least for a period of time, Ahmed kept himself in the public eye. He wrote about the plagiarism and recorded a radio interview on the issue.

Ahmed also apologized for the 2012 incident, saying that:

"You have identified several instances where I have failed to do this appropriately. I recognise this as careless and lazy, but as my overall output I believe demonstrates, those instances are uncharacteristic and out of character. I sincerely apologise to my readers, editors and my publisher Fairfax Media."

“I accept my past and that I have little room for error. But this case is inadvertent. Feels brutal.”

While firing a journalist outright for a paragraph of copied text may be “brutal”, the truth is Ahmed was extremely lucky to be working as a journalist at all, especially in such a prominent fashion. His return was dependent upon him changing his ways and there was not “little room for error”, but rather, no room for error.

Whether or not the latest plagiarism was inadvertent is irrelevant. With his history, Ahmed needed to be even more careful than other journalists. Any incident, no matter how small, would be seen in the light of his previous incident, leaving no room for even a gray area.

This raises serious questions about how to treat plagiarists once they are discovered and disciplined. While some, such as Buzzfeed editor Ben Carson are welcomed back into the field, others, such as Jonah Lehrer, are not.

Those that do return may have a second chance, but they don’t have a clean slate. It’s unlikely that a journalist without a history of plagiarism would face the consequences Ahmed did.

While the controversy around the post may have put more scrutiny on Ahmed, perhaps leading to the investigation that discovered the plagiarism, the outcome of this case was appropriate given his history. He was given a very rare second chance and did not treat it with enough care to avoid making the same mistakes.

The views expressed in this blog represent my own and not the views of iThenticate.