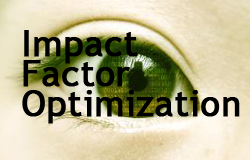 Impact factor is a big deal for scientific journals. The impact factor score is based on the average number of citations a journal receives – an approximate measure of how important and relevant a journal is to the scientific community. For a journal (along with its editors and authors) impact factor can determine distribution deals, grant funding, and the overall success of a publication. Although the impact factor score is mathematically calculated for each journal, in the end its foundation is laid by one organization: Thomson Reuters Journal Citation Reports.

Does this algorithmic measure of success and relevance sound familiar to anyone? Google goes through a very similar process in its calculated ranking of websites on its highly-trafficked search results pages. Although Google’s algorithm for calculating site position is far more enigmatic than the calculation for impact factor, there are a number of similarities between the two ranking systems.

One similarity is the stipulation that even though a mathematical process is determining rankings for both search results and Impact Factor, in the end Google or Thomson Reuters have the last word. For example, Google recently implemented thousands of changes to its algorithm to combat illicit processes like link buying. In one recent case, JCPenny.com was caught buying thousands of inbound links to its website in order to synthetically boost its organic rankings. When Google caught wind of this, it punished JCPenny.com by demoting it to no man's land for a number of lucrative search queries.

Thomson Reuter’s Impact Factor system has had similar cases of ‘gaming the system’ through the implementation of self-citations. Although it’s regular practice for journals to cite their own previous publications, some have taken it to the next level simply to boost their impact factor.

The Scholarly Kitchen recently reported on a case of impact factor gone-wrong: “The exceptional trajectory of the World Journal of Gastroenterology was being fueled not by recognition from outside authors, but by self-citation. More than 90% of citations involved in calculating their impact factor were coming from citations from its own papers, and if you remove these, the performance of the journal plummets to less than one-tenth of their official score.”

The Scholarly Kitchen article goes on to describe how the World Journal of Gastroenterology was punished by Thomson Reuters by getting de-listed for a number of years. This can seriously damage the reputation of a journal and in some cases derail a publication all together. It is essentially a cost-benefit situation for every scientific journal: throw in a few extra self-citations and potentially end up with a higher impact factor. Go overboard though, and end up getting blacklisted with no impact factor at all.

This is the same ‘game of risk’ played by websites undertaking the process of search engine optimization (SEO). There are a variety of simple and complex ways to boost a site’s search engine rankings. Google is generally OK with these processes because they abide to the framework of keeping search results relevant. Sometimes though, companies get greedy and resort to buying links or utilizing other ‘black hat’ tactics. This is when they could potentially be punished by Google.

Thomson Reuters Journal Citation Reports also needs to keep their punishments harsh for infringing on the rules of ranking; without these regulations impact factor would become meaningless. Despite the potential for punishment, many scientific journals will continue to game the system with 'impact factor optimization,' even on a relatively innocuous level, if the reward outweighs the risk.