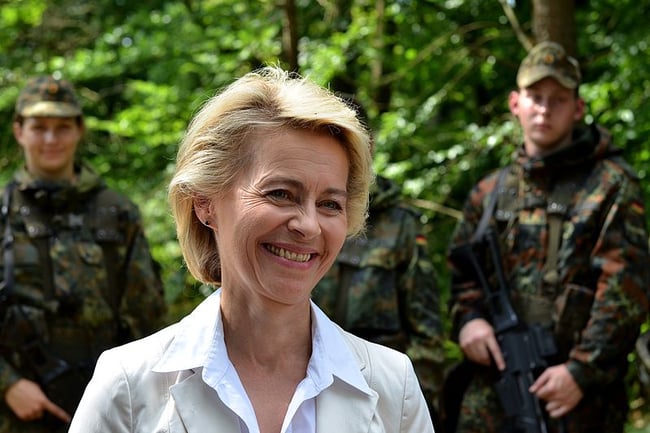 German Defense Minister Ursula von der Leyen is facing allegations of plagiarism in her dissertation following an investigation from the website VroniPlag Wiki, which claims to have found “elements of plagiarism” on 27 of the dissertations 62 pages.

Von der Leyen was awarded a doctorate of medicine in 1991 at the Hannover Medical School, four years after she was qualified as a doctor. However, it wasn’t until 2005 when she first entered politics. Then she served as the Minister of Family Affairs, Senior Citizens, Women and Youth. In 2009 she left that position and was appointed the Minister of Labour and Social Affairs before being appointed to the Minister of Defence in 2013.

Von der Leyen has staunchly denied the allegations, saying that she did not commit any ethical violations. Further, she claims that, upon learning of the investigation by VroniPlag Wiki into her work, she asked the Hannover Medical School to conduct an “expert and neutral” investigation.

However, for Germans, the story is an eerily familiar one. In 2011, the then-Defense Minister Karl-Theodor zu Guttenberg resigned amid a similar plagiarism scandal involving his thesis. He too initially contested the claims but resigned as the allegations began to pick up steam.

Also, in 2013, German Education Minister Annette Schavan resigned her post following an investigation that began in 2012, also launched by the VroniPlag Wiki. She too had contested the charges, even taking to the courts to fight them, but eventually had her degree rescinded.

Both Guttenberg and Schavan were, like Von der Leyen, Ministers under Chancellor Angela Merkel. However, for Merkel, Von der Leyen is a potentially large blow as many saw her as an heir to Merkel, who has served since 2005.

That hasn’t stopped critics of Von der Leyen from pressing their case. According to Berlin professor Gerhard Dannemann, who published his findings on the Vroniplag Wiki, “The flaws are more severe than in the case of Mrs Schavan. We’re not talking about a borderline case here.”

According to Von der Leyen, the investigation at Hannover Medical School is ongoing.

The investigation is significant for another reason. In 2013, following the Schavan scandal, the German Research Foundation altered its guidelines for plagiarism investigations, saying that schools should no longer research allegations of plagiarism based upon anonymous tips.

Many feared that such a policy would silence whistleblowers, especially when dealing with high-ranking officials. Von der Leyen’s investigation is the first of a high-ranking Minister since the policy went into effect.

This is partly because Von der Leyen requested the investigation herself and in part because her accusers are known. Still, it is clear that the policy is not completely silencing whistleblowers, even though it is still making life more difficult for them and the process of making plagiarism allegations more risky.

In the end though, the outcome for Germany and Chancellor Merkel is the same. Another high-ranking Minister faces allegations of plagiarism that calls into question her future in politics.

With so many promising political careers dashed by plagiarism in recent years, it’s clear that Von der Leyen has reason to worry. After all, she would not be the first Minister to lose her position over a plagiarism scandal. In fact, she wouldn’t even be the first Defense Minister to do so.